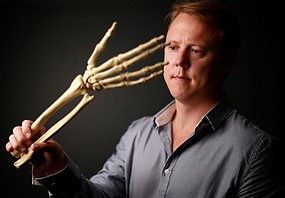 The Brisbane-based designer of the world’s smallest orthopaedic screw has invoiced US hospital suppliers $900,000 in the three weeks since the device gained Food & Drug Administration approval, and he hopes it can soon be made in Brisbane too.

Field Orthopaedics, founded in 2016 by former Army doctor Chris Jeffery alongside a team of doctors and engineers including hand surgeon Greg Couzens, has spent $600,000 and 18 months taking its “micro screw” from concept to FDA clearance, which was officially granted on July 17.

This compares with the average $39 million and 31 months that medical device makers in the micro screws’ low-to-moderate risk category (or 510-k in FDA jargon) spend getting approval, according to a major Stanford University study from 2010.

Field’s micro screw is 1.5 millimetres long versus the 2 millimetres standard for orthopaedic screws, Dr Jeffery claimed, and half its 1.2 millimetre diameter is canulated so that it can be inserted over wires, allowing surgeons to make faster and more accurate repairs of delicate bone fractures.

“Half of the shaft is air and that’s where our advanced prototyping came in, developing a material that was strong enough to withstand our design,” Dr Jeffery said.

“Our doctors drive the surgical outcomes we want, but every step of the way they are working with the engineers to understand the limits of the materials.”

Field’s screws are sold in “trays” containing 200 screws and equipment for their insertion such as countersinks, drill bits, wires and soft tissue protectors, which wholesale to distributors for $20,000.

Inspired by the “tools as a service” model of Liechenstein’s Hilti Corporation, Dr Jeffery is allowing distributors to either buy the trays outright or pay $2000 a month to have the kits replaced each time the Brisbane design team engineers an upgrade.

“Five of the 20 distributors we’ve contracted so far have chosen the subscription option, and eventually we expect 90 per cent will go that way because they’d rather take a smaller cut of the sales in return for less financial risk,” he said.

“And we’d rather not have hospital managers wondering whether they can use that worn-down drill bit a couple more times because they don’t want to pay the higher outright price.”

Field Orthopaedics has just inked a partnership with Arizona-based Ortho Sales Partners, whose network reaches every US hospital and to which it has outsourced most elements of distribution, such as logistics, marketing, training, recalls and supply chain surveillance.

“Our sales to date are insignificant compared to what’s coming,” Dr Jeffery said.

Field’s equipment is today made in several factories in the Asia-Pacific – Dr Jeffery won’t say exactly where – but he is working with Queensland University Of Technology, from where he got an electrical and medical engineering degree in the 2000s, to eventually manufacture locally.

“We’re not talking about metal bashing, we’re talking quite technical jobs,” he said.

“Australia can be an answer to some of the problems we’re seeing in the medical device industry, where manufacturing mistakes now account for 50 per cent of all product recalls, and there’s growing issues around security of intellectual property.”

After the micro screw, Dr Jeffery said Field had 11 more products in its development pipeline, for which doctors from specialties are invited to collaborate with Field’s engineering team.

The next products being developed include a new range of medical power tools, and a coated bone cement aimed at eliminating infections following orthopaedic surgeries.

Field has raised $2.3 million so far, with major shareholders outside the founders including mining entrepreneurs David Trimboli and Brian Flannery. Field’s lean methodology meant the start-up would not require more funding in the foreseeable future, Dr Jeffery said.

“Our total cashflow burn for the past 12 months has been less than $1 million, so given we’ve got $900,000 of receivables there on 30-day invoices since FDA approval, we’re almost cashflow positive and that’s not factoring in re-orders and the scale we’ll get through the Ortho Sales partnership.”

Manage Cookie Consent
To provide the best experiences, we use technologies like cookies to store and/or access device information. Consenting to these technologies will allow us to process data such as browsing behavior or unique IDs on this site. Not consenting or withdrawing consent, may adversely affect certain features and functions.
Manage options Manage services Manage vendors Read more about these purposes
View preferences
{title} {title} {title}